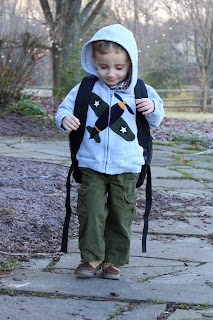 Earlier this month, Will started pre-school.  In many ways, this was a dream come true for us.  We have prayed so hard that someday he would be able to do this.  He is attending an inclusion program, which means that his class is a mix of typical children and children with special needs.  So, with lumps in our throats and slight smiles on our faces, we walked across the parking lot to take Will to his first day of preschool.  This is the first time our little man has taken a step out into the world without us.  And we were all too aware at that moment that he is not just a normal kid going to preschool.  Our older son Jack walked into preschool the first day and literally never looked back.  Will didn't exactly do that, but he did pretty good.  He's a tough little guy who can withstand more than most people (and already has), and he went into that classroom with the same fight that makes him our little Buster Beans. 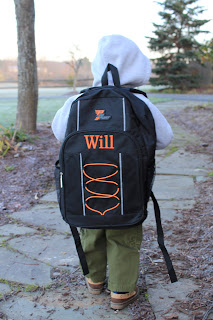 He has never experienced any form of classroom structure before and cognitively doesn't understand a lot of what goes on at school.  He is having a hard time following routines, and transitioning from one activity to another, especially when he was having a lot of fun with the first activity.  He has his crying moments, as expected.  Even though he is doing amazingly well, his cognitive age still lags far behind his chronological age, so there are of course things that he doesn't want to do, doesn't understand, or simply isn't ready for.  But he is adjusting, and quickly.  His teachers are excited to tell us all about the progress he makes each day when we pick him up.  Their enthusiasm is inspiring to us to keep pushing him to do more and to do better.

As Will adjusts to his new life in school, we are absolutely floored at the progress he is making.  His verbal abilities as well as his cognitive abilities are in high gear.  He now has more words than we can count, and he gains new ones every day.  Not only can he repeat words that we say almost whenever he wants to, he is learning to use words to communicate with us, and he is learning to understand things we say to him.  He is learning his colors, numbers, and animal sounds.  It is nothing short of a miracle to behold.  Last week, Dan told Will it was time to brush his teeth, and he immediately ran up the stairs to the bathroom and patiently waited for us to come up and help him.  When we tell Will it is time for dinner, he is the first one sitting at the table, waiting to be served.  When we tell him it is time to go outside, he goes and gets his shoes out and waits for help to put them on.  It is absolutely amazing to see. 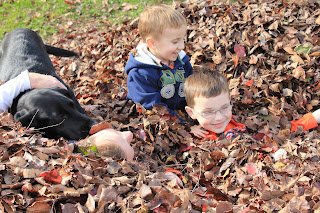 November is Epilepsy Awareness month.  Astonishingly, Epilepsy takes the lives of more Americans each year than breast cancer - almost 50,000.  Over 3 million Americans suffer from Epilepsy, more than Multiple Sclerosis, Parkinson's, Cerebral Palsy, and Muscular Dystrophy combined.  Of children with Infantile Spasms, 95% will have severe mental retardation later in life, and as many as 15%  - more than 1 in 8 - will die before they reach age 25.  So yes...we have many things to be thankful for.  However, awareness and funding for the devastating effects of Epilepsy is ridiculously low.  Words cannot express how grateful we are for everyone that follows our blog.  We hope that Will's story can help to educate others and spread awareness about Epilepsy.
Posted by Dan and Kelly at 2:37 PM

Hi, my name is Will, and I am 6 years old. I am loved very much by my parents, Dan and Kelly, my big brother Jack (age 9) and my baby brother Cole (age 2). I was diagnosed with Infantile Spasms in February of 2011. My parents created this website to keep our family and friends updated about my journey with this rare and catastrophic form of pediatric epilepsy.

After numerous treatments failed to stop the seizures (Topamax, B6 Pyridoxine, ACTH, Keppra, Vigabatrin, Depakote, and the Ketogenic Diet) doctors removed the left temporal lobe of my brain in November of 2011, which stopped all visible seizures but my development still remained stagnant. I then underwent a two stage surgery to remove my left parietal and occipital lobes in September 2012. Today, I am a walking, talking miracle and my family celebrates every seizure free day that we have been blessed with.

If you are new to this blog, scroll down to the bottom and start from the beginning.